On July 18th of 1917, a group of like-minded believers, met in the home of Mrs. Ella Jones (also known as Mother Jones) on 320 Summit street, on the north side of Camden, New Jersey. During this meeting, they were led by the Spirit to start a church. Beginning with six solid, faithful members Reverend W.P. Moore led the church and served as senior Pastor of the new founded ministry.

In 1919, the church was officially chartered at Camden City Hall and therefore incorporated. Soon after this, under the leadership of Reverend W.P. Moore, the church moved to 960 Federal street and the ministry expanded. Shortly after, the first Deacon of the church, Lonnie C. Mincey, set forth to secure larger quarters due to the thriving ministry. Deacon Mincey was led to 410 Line street where First Nazarene Baptist Church worshiped for several years.

Reverend Thompson’s pastorate of First Nazarene left a great page in history and is a big part of the church’s legacy. There was a tremendous increase in the membership of the church during his ministry and soon the location was no longer sufficient for the ministry. The Sheppard’s Hall on 438 Stevens street was purchased and became First Nazarene’s new location on the third Sunday in April of 1937. The ministry was stationed on Stevens street for twenty-seven years and was a home of spiritual training, guidance, and family.

In the latter years of Reverend Thompson’s leadership, the church suffered a split. The courageous efforts of the remaining officers and members kept the church moving forward. In July of that same year, Reverend R.F. Devereaux, then Pastor of the Evergreen Baptist Church of Palmyra, New Jersey, was called to serve at First Nazarene. Reverend Devereaux, a powerful and energetic preacher, was one of Camden’s greatest soul-stirring preachers of that time.

Many accomplishments were achieved during Reverend Devereaux’s tenure. Among them was the burning of the mortgage on the church property in 1942, thereby clearing the church of all debt, cosmetic renovations of the building, a pipe organ, and new pews. Also, during this time of change, more than two-hundred new members joined the ministry.

The growth and progress of the church again necessitated the congregation to seek a larger building. The stamina and faith of the members working with Pastor Williamson led the church to start the construction of a brand-new church home for First Nazarene.

In 1964, the Lord allowed First Nazarene to march into their new edifice, located at 1476 South Eighth Street. One needed only to observe this beautiful new House of Worship erected at the corner of Eighth and Fairmont Streets that materialized during Pastor Williamson’s ministry to realize his leadership qualities and ability.

Under the pastorate of Reverend Dr. Williamson, many souls were brought to Christ. During his ministry numerous groups were formed, including the Scholarship Club, the Young Adult Usher Board, Welcome Committee, and the Deaconess Club. By 1974, the new church was paid off. The church purchased an electronic powered printing press, began a duplex offering system, and purchased a Life Membership in the NAACP. Later in 1974, the Lord called home His servant, Reverend Dr. Ethridge Williamson Sr. Deacon Henry Sommerville, Chairman of the Fellowship of Deacons and other officers cared for the flock for two years.

In November 1976, The Reverend John A. Jones of Washington, D.C. was called to Pastor First Nazarene Baptist Church. Under the leadership of Pastor Jones First Nazarene operated its Spiritual Hospital and continued the spiritual development of God’s people.

There were many improvements made to the physical structure of the House of Worship under the leadership of Pastor Jones. A new ceiling was installed, the pulpit and choir loft were enlarged, a new air conditioning unit was purchased, and new audio and computer rooms were built. The church also purchased the garages adjacent to the church and land across the street in hopes of providing additional parking facilities.

Pastor Jones reached the airwaves preaching the word of God on Sunday mornings on WTMR-AM radio station and his gift reached thousands who were sick, shut-in, and incarcerated.

Pastor Jones became a father of not only First Nazarene but to the City of Camden. He reached the youth of the community by adopting and supporting schools, including Camden High School, Woodrow Wilson High School, Medical Arts High School, Creative Arts High School, The Riletta T. Cream Family School, and Sumner Elementary School. Pastor Jones also believes in supporting first responders and worked closely with the Camden City Police and Fire Departments and EMT Services. Reverend Jones was even named honorary Chaplain of the New Jersey State Police.

First Nazarene continued to grow under the dynamic and prophetic leadership of Pastor Jones but the need to expand the facilities became evident and as a result, an ambitious building fund project was initiated. In August of 2005 a groundbreaking ceremony was held to start the construction of a new church building.

Then in February 2007, after much prayer and supplication, the Lord allowed First Nazarene Baptist Church to leave 1476 South Eighth street and enter into a beautiful new campus and sanctuary located a block and a half away at 1500 South Eighth street.

Pastor Jones ensured that First Nazarene remained dedicated to missions and community outreach. Believing in the scriptures that says “faith without works is dead,” (James 2:17 KJV) the church initiated the Community Bread Basket Ministry which provided food and grocery items to local families in need, the Prison Ministry, and the Community Evangelism Ministry to spread the Word of God and hope to those without hope.

In February 2017, Reverend J.A. Jones retired after serving the Nazarene family for forty years and was bestowed the title of Pastor Emeritus. During, Pastor Jones’ last sermon as Pastor the mantle was passed to a son of Nazarene and current Senior Pastor Reverend Dyheim T. Watson Sr. Through the innovative and strategic leadership of Pastor Watson First Nazarene continues to grow. 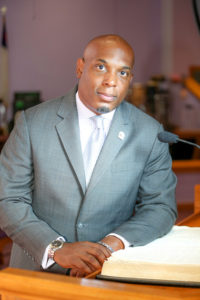 The Reverend Dyheim T. Watson Sr., Senior Pastor of the First Nazarene Baptist Church of Camden, NJ, is a native of the city of Philadelphia and is the third of four children born to Deacon Virgil and Carolyn Watson. The Lord specially crafted this young man of God to be used in a mighty way.

Reverend Watson was educated in the Philadelphia school system and upon his High School graduation, he enrolled in Eastern College and Eastern Baptist Theological Seminary where he received his Bachelor of Arts in Practical Theology and Organizational Leadership. Watson then continued his education by completing his certification in Pastoral Studies from the Faith Bible Seminary in St. Roberts, Missouri graduating with honors.

Reverend Watson began his journey in leadership and ministry over seventeen years ago at the Christ Community Baptist Church in Philadelphia under the Pastorate of Reverend Arthur R. White. Upon receiving his call to ministry, Watson served as Youth Pastor and musician to the Mt. Lebanon Baptist Church and New Temple Baptist Church located in Philadelphia. Watson then became the Interim Pastor of the Greater Praise Baptist Church, Interim Chaplin for the 427th Transportation Battalion of the US Armed Forces and a Special Chaplain for the IRR recalled mission for “Operation Iraqi Freedom” where he was deployed for ten months. In 2003, Reverend Watson accepted the Pastorate of the Unity Baptist Church in Chester, PA making him one of the youngest Pastors in the city of Chester.

Reverend Watson has a heart for community development and the cities in which he has served. He is the former Executive Director of Young Black Minds Inc., former organizer of the Philadelphia Student Union, and former elected President of the Philadelphia School Board City-Wide Student Government. In 2010, Reverend Watson became the youngest candidate to run for State Representative in the 186th legislative District where he is noted for being an activist on student and civil rights.

In 2012, Reverend Watson accepted a Pastoral position at his home church, First Nazarene Baptist Church in the city of Camden. He is honored and privileged to assist his Pastor, Reverend J.A. Jones and continue the foundation and vision that he has laid.

The Biography of Bishop J.A. Jones

Reverend Jones is recognized nationally and internationally as a “Bible Preacher” and has been invited as a keynote speaker for dignitaries all around the world. His dedication to foreign mission has been extensive and has reached nations like: San Andres, Columbia, Barbados, West Indies, and Haiti. He has also preached in the historic Providence Baptist Church of Liberia, West Africa.

Pastor Jones is a firm believer in serving the community and has been very instrumental in establishing Village Outreach Services, which offered special crafted services such as: transportation for the elderly, food donations, and a clothing storehouse for the homeless. Pastor Jones’ ministry cannot be put in a box, as he reached the airwaves preaching the word of God on Sunday mornings on WTMR-AM radio station, his gift reached thousands who were sick, shut-in, and incarcerated.

Pastor Jones has many powerful, note-worthy affiliations and served with The Foreign Missions Bureau of the Progressive National Baptist Convention, the Mayor’s Advisory Committee, Chairman of the Bethany Baptist Ministers’ Retreat, the Camden Police Department, Chaplain for the New Jersey State Troopers, and the Boys & Girls Club of the city of Camden. Under his leadership, Pastor Jones and the Nazarene family moved into their new sanctuary in February 2007. God continues to work through Reverend Jones to bless the community through his vision and leadership. He has a special love for missions and prophetic scripture and is constantly in demand and continues to travel to teach and preach.